Culture and Events in Bielefeld

Experience the diverse and colorful culture of Bielefeld

Numerous events inspire not only the people of Bielefeld year after year, but also thousands of visitors from the region: Leineweber market, Sparrenburg festival, Christmas market, Wackelpeter or run & roll day – these highlights offer something for everyone. You can find more information under Events in Bielefeld.

The many museums and numerous galleries in Bielefeld ensure the enjoyment of art and a variety of exhibitions. It is also worthwhile for theater visitors and opera lovers to visit our city and the Bielefeld City Theater with around 600 performances annually. The theater is one of the largest in the East Westphalia region.

In addition, a wide variety of events take place in our Bielefeld City Hall, the Rudolf-Oetker Hall, the Seidensticker Hall, the Lokschuppen or the Ravensberger Spinnerei.

Please inform yourself about current opening hours and guided tours at the respective tourist information, as some appointments are not taking place due to the corona pandemic.

The Historical Museum in Ravensberger Park presents the history of Bielefeld and its region vividly and vividly. From the early suburban settlement to the present day, it documents how people worked and lived. The focus is on the industrial age, which has had the most lasting impact on the city and its surroundings since the middle of the 19th century. In the restored buildings of the former Ravensberger spinning mill, original machines from the most important branches of industry in Bielefeld, the famous Bielefeld sewing machines and bicycles as well as evidence of the working-class culture and the bourgeoisie, point to the working methods and lifestyles of the urban population. They are embedded in effective productions that stimulate curiosity and lead to questions of their own about history.

The Kunsthalle Bielefeld is dedicated to German and international art of the 20th and 21st centuries. As an architectural monument, it combines the function of a museum with its own collection and an exhibition house with three to four large changing exhibitions a year on the art of classical modernism and positions of contemporary art. Built by the great American architect Philip Johnson between 1966 and 1968, it is the first evidence of his architecture in Europe and one of the most important museum buildings of the post-war period.

Not only did the Bauernhaus Museum receive the Special Commendation award as part of the European Museum Of The Year Award 2001, it is also the oldest open-air museum in Germany, which has been on the Ochsenheide in Bielefeld since 1917.

With a lot of voluntary, private and municipal support, the Möllering farm was built from Rödinghausen (Herford district) in 1590. There is also a bakery (1764), a Spieker (1795)), a windmill (1686) and a Boke mill (1826) on the site. The themes in the main house and in the outbuildings are devoted to rural social history in the middle of the 19th century in the Ravensberg region and depict life on the farm as a complex economic and social system. The café is housed in a barn (1807).

The Natural History Museum is located in one of the few remaining aristocratic mansions in the city from 1540, the Spiegelshof. There, in the permanent exhibition, the relationship between humans and nature is addressed in an exciting and somewhat unusual way – as well as the value of biodiversity and the phenomena of climate change.

A special attraction is the so-called geo-tunnel, which uses interactive models to provide you with exciting information about the geological processes in the region, but also about plate tectonics and global earthquakes.

In addition, three to four special exhibitions are shown each year, supplemented by an extensive educational and mediation program for children and adults.

Since 1929, the Kunstverein Bielefeld has been dedicated to promoting contemporary art and reflecting on current social issues using artistic positions. His home is the Waldhof, which was built in the late Renaissance. One of the oldest courtyards in Bielefeld offers space for aesthetic experiments and new perspectives. The art association invites the public to experience the exciting trends in contemporary art and to be surprised by young artistic positions.

The house on Oberntorwall has served as an upper-class villa since its completion in 1836 and as a commercial building from 1904. In 1930 the administration of the Chamber of Crafts moved there. In 2015, the classicist villa became the property of the Goldbeck Foundation.

Peter August Böckstiegel (1889-1951) is one of the most important artists of the 20th century from Westphalia. His works are exhibited in the Peter-August-Böckstiegel-Haus museum. While his early work still had impressionistic echoes, Peter August Böckstiegel later developed into an expressionist artist and was one of the most important representatives of the late form of this direction.

The international Samuelis Baumgarte Galerie looks back on a 40-year tradition of art education and art advice. Founded in 1975 by the renowned artist Ruth Baumgarte, her son Alexander Baumgarte took over the company as sole owner in 1988. Located in the center of Bielefeld, directly opposite the town hall and the city theater, the gallery now has a generous exhibition area of ​​over 1,000 square meters.

The Theater Bielefeld is one of the largest theaters in the region, with around 600 performances per year in drama, dance and music theater. The Drei-Sparten-Haus thus not only determines the local variety of programs, but with its varied program often enjoys national attention far beyond the borders of East Westphalia. Bielefeld’s free cultural scene is omnipresent in streets, squares and small theaters with open-air performances and experimental theater all year round.

The AlarmTheater, founded in 1993, is a professional theater with a beautiful venue in the west of Bielefeld. Up to 8 plays and crossover performances for young people and adults are produced annually.

The AlarmTheater not only has a wide range in its program, but also topicality in its productions, which include Thematize flight, racism and dementia and have received numerous awards. Since 2013, a thematic focus has been on working with young refugees.

What would the musicans of the Philharmonic of Bielefeld be withouttheir every day training with their instruments? Practice and try scales, etudes, operas and symphonies day in and day out in order to present pure emotions on the day of your visit to the Rudolf-Oetker-Halle, the city theater or one of the countless other venues on the stage or in the pit.

In addition to guest appearances, the stage of the Theaterhaus in Feilenstraße is used by two Bielefeld theater groups. The Trotz-Alledem-Theater is especially known for its challenging plays for children and young people, but with the regular evening for weird entertainment and performances by Heinz Flottmann, it also offers a program for adult audiences.

Here you can experience spectacular artistry and grandiose comedy moments in the two-monthly changing shows, enjoy culinary delights from the GOP kitchen and end the evening in the ADIAMO Dance Club.

Concerts in Bielefeld and the surrounding area

check out Bielefeld.jetzt for events and exhibitions 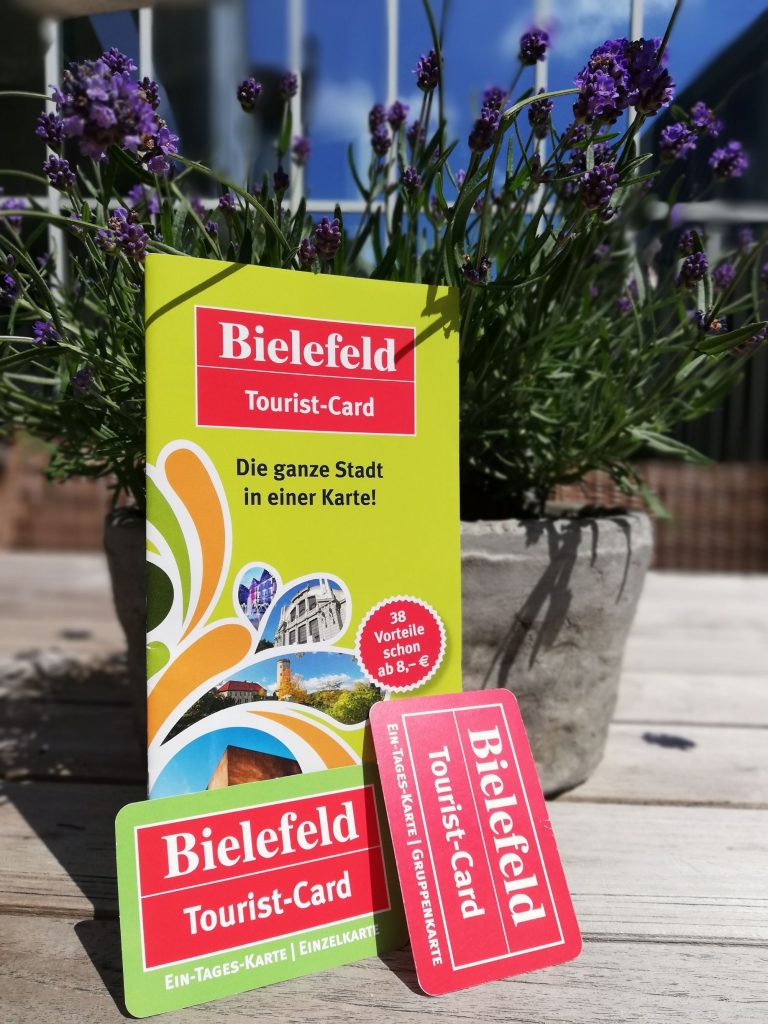 The whole city in one ticket - TouristCard Bielefeld

Theaters, museums, concerts, festivals, shopping, gastronomic highlights – Bielefeld is a lively city with everything your heart desires. With the Bielefelder Tourist-Card you buy the advantage package for an exciting day. Experience the best activities in the city with free or reduced admission and reach all attractions in a relaxed way by bus & train, because the tickets are of course included.

The one-day single ticket and one-day group ticket can be conveniently purchased from us at the reception. For longer stays there are also 3-day single and group tickets at the Tourist Information Bielefeld. You decide to use the Tourist Card on your way through the city? No problem, the cards are also available in the city buses, at the Sparrenburg, the participating museums and in the ServiceCenter moBiel.

Any cookies that may not be particularly necessary for the website to function and is used specifically to collect user personal data via analytics, ads, other embedded contents are termed as non-necessary cookies. It is mandatory to procure user consent prior to running these cookies on your website.